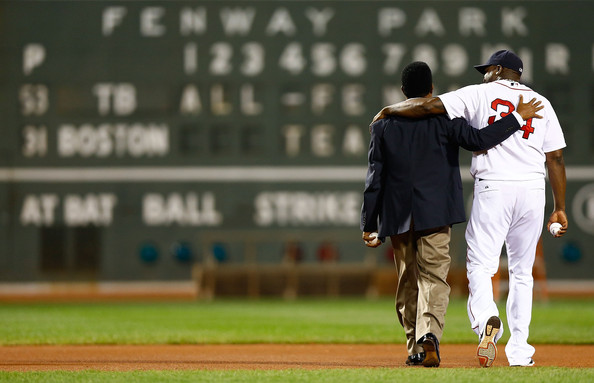 Big Papi, Pedro, the Power of Peers & the Postseason!

I think a lot of Red Sox fans would agree that without the heroics of David Ortiz (Big Papi), the story going into this year’s postseason might have focused on the prospect of a match-up between the Boston Red Sox and the Chicago Cubs and which team might finally break their respective curse.  What fewer people may realize (outside of New England) is that if not for some heavy lobbying by Pedro Martinez after Ortiz was released by the Minnesota Twins at the end of the 2002 season, Ortiz not only wouldn’t have joined the Red Sox, but may have found it difficult to get a job with any team in major league baseball at that time.

In a piece by ESPN last month, Ortiz and his agent described the situation this way:

FERNANDO CUZA, AGENT TO DAVID ORTIZ: David was calling me five times a day. He was nervous as s—. I’ll never forget being in that coffee shop with him at the Sheraton in Santo Domingo [capital of the Dominican Republic]. That face.

Every day that went by, you could see it. He was saying, “I’m young. I have no other skills but to play baseball, but nobody wants me. What am I going to do? How am I going to provide for my family?” I told him if you get the chance, you’re gonna be a son of a bitch. You’re gonna tear it up. I didn’t think his career was over, because he was a great hitter.

DESPITE HIS AGENT’S words, Ortiz was in a full panic by January. Spring training was six weeks away, and he had no job. There were no offers, no workouts, no invites. The Red Sox now had Jeremy Giambi, Zuleta and Hillenbrand on the roster. Then came an intervention from an unlikely source — perhaps the greatest Sox pitcher of all time.

“[Martinez] called me after the Twins cut David and said, ‘I’m not calling about my contract. I just want to call you directly and make a suggestion.’ I said, ‘Yeah, go.’ He said, ‘David Ortiz is out there. He just got released. It baffles me as to why he was released. But he’s really a good guy, No. 1, and he can really hit, No. 2, so it would mean a lot if you can give him a chance to make the Red Sox.’

“It was that call that set in motion the events that led us to signing David Ortiz.”

When the Twins cut Ortiz, his agent, Fern Cuza, sent faxes to every team informing them of Ortiz’s availability. No team showed meaningful initial interest. Ortiz believes Martinez changed that.

When the Red Sox organization and its fans paid tribute to Big Papi on the final day of the regular season at Fenway Park, Ortiz publicly thanked Pedro Martinez for being the guy he credits for making it all possible.  If the power of peers could rid Boston of the Curse of the Bambino, then imagine how it could impact your life.

As we prepare for the Year of the Peer, here are two things you can do today that will have an immediate impact on your life and the life of someone else:  1) Think of a peer that helped you at some point in your life.  Call, email, text, create a video or pen a handwritten note and thank them!  You’ll make their day and you’ll feel pretty good, too! 2) Think of a peer who could either benefit from your encouragement or expertise (or both) and let them know that whatever it is they are trying to achieve in life, that you are in their corner.  Show them you believe in them and if you think you can help by making a “Pedro-call,” don’t ask, just do it.