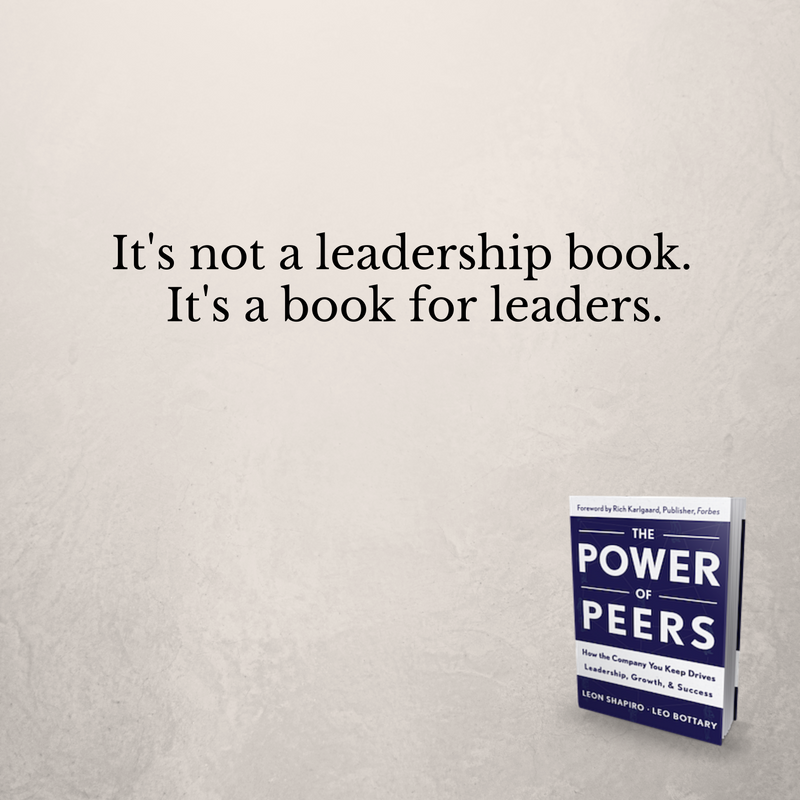 A Simple Idea, but Not a Small One

Later this week, I look forward to having my coauthor Leon Shapiro join me as my guest on the Year of the Peer Podcast with Leo Bottary, as we mark the one-year anniversary of the launch of The Power of Peers: How the Company You Keep Drives Leadership, Growth & Success.  When I think back to how much we were anticipating the release of the book, it’s hard to believe how quickly the time has passed.

Leon will share much of what he’s experienced over the past 12 months during our upcoming conversation.  For me, it’s been the learning experience of a lifetime.   I’ve enjoyed the privilege of speaking to business leaders, scholars, and students, both here in the U.S. and abroad, sharing key concepts from the book and being fascinated by countless stories that people, from all walks of life, have shared with me about the power of peer in their lives.  No matter where we live, none of us achieves anything entirely on our own.

In the end, we wrote the book because when you look at the positive difference peers and peer groups have made in the lives of CEOs and business leaders all across the world and then realize how few of them avail themselves of this powerful resource, it’s hard to square.

How could something that is so simple and works so well, be so underutilized?   In a world where, all too often, we don’t give peer influence a second thought, what if we did?   What if we could transform peer influence into peer advantage by simply being more selective, strategic and structured about how we engage those around us?   The good news is we don’t have to guess.   We know what happens, and I believe if more people reached out to one another more positively and purposefully more often, the world would be a better place.

That’s what makes every minute I spend writing a blog post, preparing for a podcast interview, or speaking to a live audience so worthwhile.   Who we surround ourselves with matters.  With a little effort, we can make it matter even more.

It’s not unlike the premise of Drew Dudley’s famous TED Talk, where he described leadership, not as an ominous concept, but as making a difference in the lives of those around us, one person at a time.  He closed by saying, “It’s a simple idea, but I don’t think it’s a small one.”