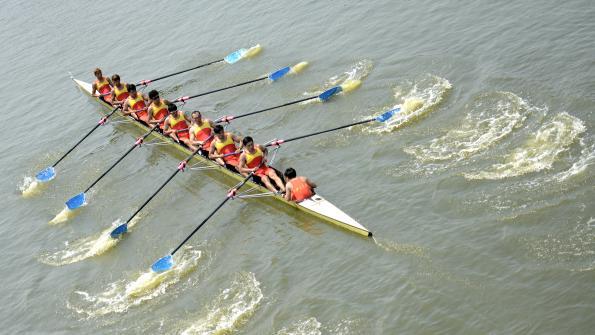 When I thought about a headline before writing this post, the first thing that popped into my head was what you see here, “Collaboration Trumps Competition.”  I didn’t connect it to the presidential election at first and yet it’s fitting. So here we go.  Regardless of whether you’re a Trump or Clinton supporter, the tenor of the campaign itself has sunk to new depths.  Yet when it’s all over, we’ll be reading about the importance of healing and uniting the country.  Ironically, the same media that fueled the fire and aggravated the wounds will start handing out medical supplies.

The problem is this:  The deeper the wound, the longer it takes to heal – the more likely it will leave a scar. The lower we go, the tougher it is to climb out of the hole.  The harder is it to trust one another again.  The tougher it is to make the transition from fighting against each other to fighting for one another.  Regardless of who prevails in the election, we may be headed for one of the toughest recovery periods since the Civil War.

At present, we’re a nation suffering from boiling frog syndrome.  Consider this, in 1948 Harry Truman campaigned against what was dubbed the “Do Nothing Congress” – a body that eventually passed 906 bills.  Compare that to the 112th Congress (283), the 113th (296), and the current collection of legislators (228), with just a few months to go before the clock runs out.  Acrimony has bred distrust and revealed the worst of partisan politics.  Now, it’s become acceptable to get elected to Congress and come back virtually empty handed every two years as long as you hold true to your hard and fast positions.  It happened without most of us realizing how dangerously hot the water has become.

Something has got to change – fast!  2017 should be the start of asking our legislators (and leaders at all levels from every branch of government) to work and play well with others, so we can move our country forward instead of staying mired in the kind of gridlock that holds a country hostage.  To be fair, however, we all have a role to play in making this possible.  As I pointed out in my last post about the Connections exhibit at the Smithsonian’s Renwick Gallery, everything is connected.  We not only have to ask more of our political leaders, we have to ask for better behavior by media and business leaders as well.  That starts with us.

If the media cared more about their viewers than beating their competitors, then maybe (just maybe), they would stop covering wackos setting their hair on fire and start celebrating meaningful collaboration and compromise.   Today, collaboration breeds political casualties  – winners and losers, leaders who “caved to the other side.” As long as everything remains a zero-sum game and those who put the country first continue to be vilified by the press, we’ll all be the biggest loser.  Compromise is not a four-letter word. We have the power to send a message to our media and change the climate so that our elected officials can get back to the business of governing.

Speaking of business, effective collaboration requires trust, and business leaders could set a better example.  The recent Wells Fargo scandal is just one among the latest breaches of the public trust in industries ranging from finance to pharmaceutical to automotive, etc.   Companies who respect their customers and hold true to their values (all the time) are companies worth supporting.

I wrote a piece recently specific to business leaders at Shaping the Odds titled Five Reasons 2017 Will Be the Year of the Peer.  Reason #6 is we have no choice. As trust among institutions of all kinds remains low, we’ll have to rely on one another more than ever if we’re going to turn the tide.  Alone, fighting the current seems impossible.  Together, however, we are powerful beyond measure.  Collaboration trumps competition any day of the week.   Since we’re all in the same boat, it’s time to start rowing together and prepare for the Year of the Peer!