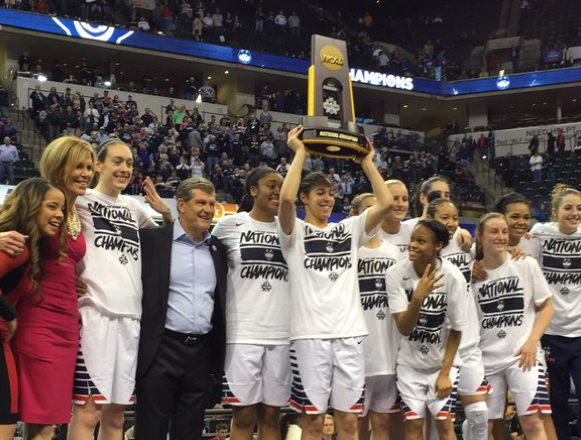 Last April, statistician and writer Nate Silver dubbed the UCONN Women’s Basketball 2015 squad as the most dominant college basketball team on earth.  Fast forward to April, 2016 and the dominance continues, with UCONN adding a fourth consecutive national championship, the team capped an undefeated season (its 6th all-time) with an average margin of victory of nearly 40 points per game.  UCONN won its semi-final game at the Final Four against Oregon State by 29 points and the final against Syracuse by 31 to win its 11th national championship since capturing its first title in 1995.  Wow!

Mia Hamm once said, “It’s harder to stay on top than it is to get there.”  So how does Connecticut do it and what can we learn from this incredible team?  In addition to the strong peer-to-peer culture I described in two earlier posts, UCONN optimizes in ways other teams don’t. In our book, The Power of Peers: How the Company You Keep Drives Leadership, Growth & Success, we talk about four ways we engage our peers.  One of them we call optimize!

We optimize when we work together in teams to bring a high level of excellence to achieving a common goal. Leaders often form organizational “tiger teams” to tackle special projects. The Blue Angels, the U.S. Navy’s flight demonstration squadron, conducts debriefs following every (what we see as perfect) flight to talk about how they can do better the next time. Top sports teams participate in practices that are often more rigorous than the games to ensure top performance when it truly counts.  Former UCONN and current WNBA star Sue Bird says that no women’s basketball team practices like they do at Connecticut.  And as an ESPN analyst, she’s been to a lot of women’s college basketball practices.

The work of optimizing tends to take place among a more homogeneous group of peers and be temporary in nature, determined by either the length of a specific project or the span of a season.  When it comes to business, we need to take time to practice, and we certainly should make the time to bring people together for debriefs.  Unfortunately, most companies don’t do much of either.  I believe we could have more companies that are consistently great, if people would just do what it takes to make that possible.

Longtime Runners’ World writer Joe Henderson once said (and I’m paraphrasing), it’s not always about doing things no one can do, it’s about doing things anyone can do but don’t.  While UCONN has three of the best players in the country graduating in the next month or so, it’s likely that next year’s team will continue to do what most teams don’t, and by believing in each other, they’ll be poised for another fantastic season.