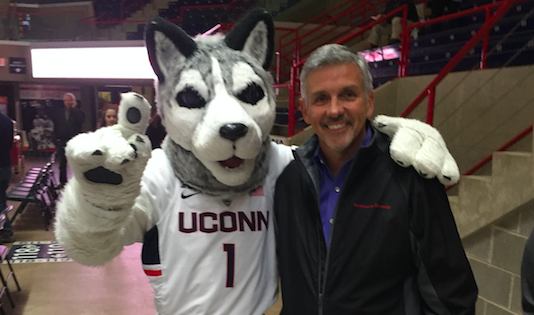 Meet Jonathan the Husky, the mascot for the University of Connecticut.  He’s an enduring and evolving symbol, named in honor of the last colonel and the first governor of the “Constitution State.”  There’s a costumed version and an actual canine.  I’ll leave it to you to guess which one is standing with me in this photo taken at last night’s game – an exhibition between the 2016-2017 edition of the UCONN women’s basketball team and Indiana University of Pennsylvania (IUP).

My interest in attending the game was to see firsthand how a team that lost its top three players, who also happened to be the top three picks in the WNBA draft, would reassemble itself for this upcoming season.  With the leaders of last year’s team gone, who would step up this year?   While it’s way too early to tell, it may turn out that there’s no natural go-to player, so much as they play as a jazz ensemble that features a different solo performer each and every night.  (A scary thought if you’re tasked with preparing to play them).

You might also argue (as I do) that last year’s stars Breanna Stewart, Morgan Tuck and Moriah Jefferson may have graduated, but they are ever present.  The peer-to-peer culture that these players learned from those who came before them, lives on in the team who stepped on the floor last night.   They played with an energy, excitement and athleticism that showcased their own personality, and yet at the same time, they were strengthened by the cultural legacy that makes Connecticut uniquely Connecticut.  Turns out, UCONN received a pre-season AP ranking of #3 in the country.  Rebuilding year?  Doesn’t look like it.