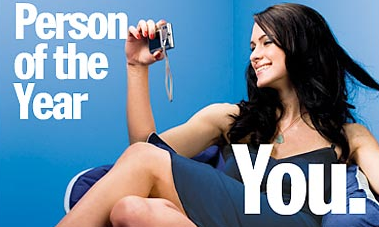 Add “Person of the Year” to Your Resume

It was Christmas ten years ago that YOU were named TIME’s Person of the Year!  My guess is that most of you never noted it on your resume or added it to your LinkedIn profile.  I’m just wondering, “Why not?”

For all these years, you probably believed that “you” wasn’t specific to you; it was more of an “us” thing.  You may have thought that because you didn’t earn this distinction entirely on your own, including it among your list of honors and awards would have been considered a stretch, so to speak.  That’s understandable.  So let me invite you to think of it this way instead:  No other human who has ever been named TIME’s Person of the Year did it entirely on their own either.  (Check out the list).  They had help – lots of it.  Here are a few excerpts from Lev Grossman’s 2006 piece, You — Yes, You — Are TIME’s Person of the Year, just to put what you did in perspective:

“The ‘Great Man’ theory of history is usually attributed to the Scottish philosopher Thomas Carlyle, who wrote that ‘the history of the world is but the biography of great men.’ He believed that it is the few, the powerful and the famous who shape our collective destiny as a species. That theory took a serious beating this year. To be sure, there are individuals we could blame for the many painful and disturbing things that happened in 2006…

“But look at 2006 through a different lens and you’ll see another story, one that isn’t about conflict or great men. It’s a story about community and collaboration on a scale never seen before. It’s about the cosmic compendium of knowledge Wikipedia and the million-channel people’s network YouTube and the online metropolis MySpace. It’s about the many wresting power from the few and helping one another for nothing and how that will not only change the world, but also change the way the world changes.”

I encourage you to read the entire article, but here was the kicker for me:

“But that’s what makes all this interesting. Web 2.0 is a massive social experiment, and like any experiment worth trying, it could fail. There’s no road map for how an organism that’s not a bacterium lives and works together on this planet in numbers in excess of 6 billion. But 2006 gave us some ideas. This is an opportunity to build a new kind of international understanding, not politician to politician, great man to great man, but citizen to citizen, person to person. It’s a chance for people to look at a computer screen and really, genuinely wonder who’s out there looking back at them. Go on. Tell us you’re not just a little bit curious.”

Fast-forward a decade.  In my first Year of the Peer podcast, to be released January 12th, Charlene Li suggests that despite the fact that we have more ways of connecting with one another than ever, real conversation has given way to the Bully Pulpit.  I agree with her assessment. There’s too much talking, not enough listening, and not nearly enough dialogue.  If that’s the case, we’re not maximizing our potential as a society when it comes to building international understanding – citizen to citizen, person to person.  We’re just not.

I don’t think we’re failing at what Grossman described as a “massive social experiment,” but I do believe we’ve gotten sidetracked.  My hope is that if, together, we embrace the Year of the Peer – or at least the sentiment behind it – that we can realize our global collaborative potential.   With any luck, we’ll be named TIME’s Person of the Year for a second time.  And when that happens, whether it’s 2017 or 2018, you can add another Person of the Year honor to your resume!