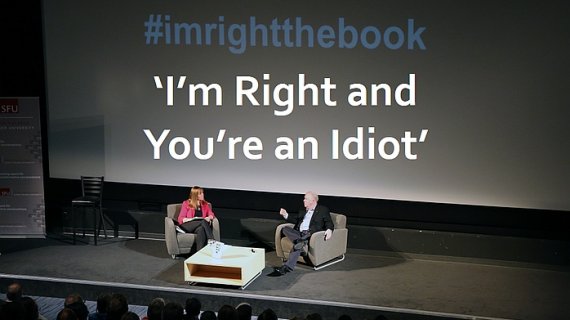 Name-calling and Our Pernicious Public Discourse

When I grew up, kids called each other names for a whole host of reasons, not the least of which is they were not particularly equipped to do much else.  That’s how they covered for their own lack of knowledge and insecurities.  Most of us left this childish behavior behind.  Over time, society asked more of us – that we actually had to offer something that didn’t involve name-calling or ad hominem attacks.  We were expected to make our case on the merits in a fashion that inspired thoughtful debate.  Unfortunately, that’s all changed.

In 2016, we were introduced to “Crooked Hillary” and “Dorito Mussolini”.  More recently, U.S. Intelligence veteran Malcom Nance identified Trump senior advisor Stephen Miller as a “Baby Goebbels.”   Grown-ups are now behaving like 8-year-olds, and I’m pretty sure that today’s kids are modeling this behavior more than ever.  After all, it’s not like the name-calling is just coming from crazy Uncle Dave; it’s coming from the mouths of government leaders and political pundits on every media platform.  It’s only a matter of time before we’ll turn on CNN, FOX News or MSNBC to bear witness to a debate that is reduced to the Pee-wee Herman loop, “I know you are, but what am I?”

During the Year of the Peer, we have to expect more of our leaders.  Don’t we?  Check out James Hoggan’s book, I’m Right and You’re an Idiot: The Toxic State of Public Discourse and How to Clean it Up.  He says, “The most pressing environmental problem we face today is not climate change. It is pollution in the public square, where a smog of adversarial rhetoric, propaganda, and polarization stifles discussion and debate, creating resistance to change and thwarting our ability to solve our collective problems.”

If we’re ever going to turn it around, Hoggan adds, “It is important to recognize that in a time when mistrust and polarization have soared to all-time highs, conversations aimed at injecting information into people in order to cure them of their misunderstanding will fail.”

Have a look at David Biggs’ terrific interview with James Hoggan and consider grabbing a copy of the book.  Maybe if we made it required reading for all leaders, they would actually start to act their own age.

What do you think and how can we fix it?

2 thoughts on “Name-calling and Our Pernicious Public Discourse”