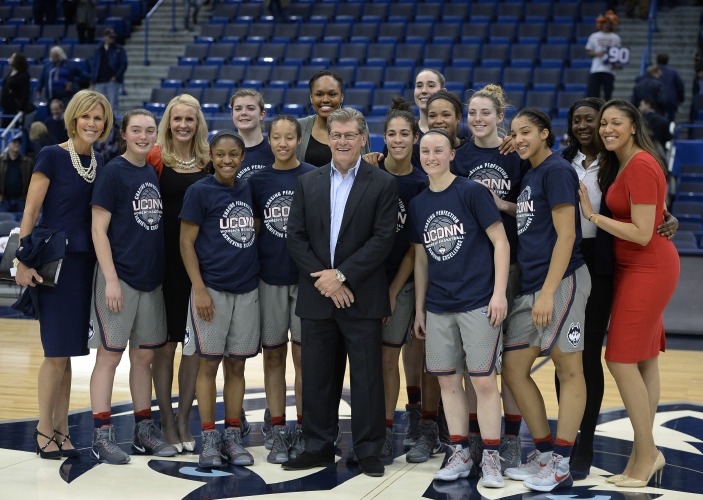 Friday night, I was on a Delta flight from JFK to San Diego, where I took advantage of the free satellite tv to watch the women’s college basketball semi-final games from the Final Four in Dallas.  I was especially interested in the second game between Mississippi State and the University of Connecticut.   UConn has become even more famous this year for having won 111 consecutive basketball games.  And after losing three seniors, who were the top three picks in the WNBA last year, this would have been a rebuilding year for any other program in America; yet, UConn was back to the Final Four – streak intact and on the doorstep of winning its fifth straight national title.

While I enjoyed the streak as much as any UConn fan, I was far more impressed by the team culture that makes such a streak possible – one that doesn’t measure itself against its opponents so much as set its own standard of excellence.  One that inspires a relentless commitment to getting better each and every day.  I’m not sure when it started, but the hashtag #AndCounting took on a life of its own once UConn broke its own record (90) for consecutive NCAA basketball wins (men or women), and with each win thereafter, it was always noted, for example, as 100 #AndCounting, etc.

The prevailing thinking across the country, and especially for UConn fans, was that this team showed no signs of losing, and if they didn’t lose this year, everything points to their being even better next year.  ESPN’s Kara Lawson speculated that because of this, 200 consecutive wins wasn’t out of the question.   But as head coach Geno Auriemma warned everyone time and time again, all streaks come to an end.  Unfortunately for UConn, it ended on Friday night with a buzzer beater in overtime.

The winning streak and program’s 11 national championships are great headlines, but they aren’t the story.  The story and the lessons the coaching staff and these young women have to teach all of us lie in the team’s culture.  The streak that I believe matters most to the coaching staff, and should matter most to the players, is the number of consecutive days they add to perpetuating a winning culture and honoring the players who came before them.  In fairness, during many interviews I watched throughout the season, the players talked about this quite a bit.  They don’t focus on the result; they focus on what makes the result possible.

To that end, I’ve created a new UConn streak.  Let’s call it the UConn culture streak.  I’ll mark its beginning as January 31, 1990 – the day the UConn women’s basketball team played its first game at the then new Gampel Pavilion.  The following year, the team would advance to its first Final Four, and in 1995, go on to win its first national championship.  The rest is history.  As of today, its culture streak is 9,923 days #AndCounting.   Congratulations to UConn on a wonderful season and for showing all of us what commitment to excellence and teamwork is all about.