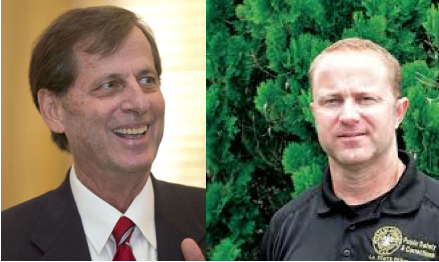 The Complete Biographies For Today’s Guests:

Secretary James M. Le Blanc has worked for the Louisiana Department of Public Safety and Corrections for more than 40 years. He has served the past nine years as Secretary, being appointed to the Cabinet position by two governors.

Le Blanc enlisted in the United States Army and served during the Vietnam War. After an honorable discharge in 1971, he returned to school and received a B.A. in Business Administration from Southeastern Louisiana University in December 1972.

Secretary Le Blanc’s commitment to Louisiana’s justice system includes a focus on the fundamental importance of public safety while giving all citizens the opportunity to live productive lives. He routinely emphasizes “reentry” as a major factor of the Department’s mission. Reentry is his passion. Le Blanc believes that establishing valuable, real-world vocational, educational and life skills training for offenders in all institutions is one of the keys to ensuring the core mission of public safety. Reducing Louisiana’s number one (in the world) incarceration rate is a tall order, but Le Blanc’s enthusiasm for seeing offenders succeed is all the motivation this leader needs.

His many awards include being selected as the National Association of Wardens and Superintendents (NAAWS) “Warden of the Year.”

Perry Stagg is Deputy Assistant Secretary at the Louisiana Department of Public Safety and Corrections (DPS&C). He oversees the Office of Adult Service, and has worked in the field of Public safety and Corrections for 21 years with experience in Investigations, Finance, Programing, Security and Administration